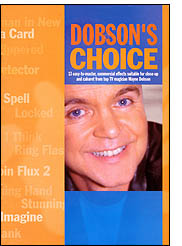 Dobson's Choice contains 13 easy-to-master commercial magic tricks, for both close-up and cabaret work, from one of the country's most successful magic performers ever...

A number of routines instantly caught my eye: Imagine, Chews a Card and Invisible Lie Detector.

Imagine is very clever. Based on Jerry Sadowitz's Mind Ray, which itself was based on a routine by Bob Hummer and Ray Grismer... visual card magic at its best - devious methods achieve impossible results.

Chews a Card is straight from Wayne's act (it really is) and has some great comedy, combined with really strong magic, and is ideal for stand-up work.

And Invisible Lie Detector is one of those tricks that is so simple, yet so effective, that you'll ask yourself "why didn't I think of that?" An "invisible lie detector" reveals the spectators chosen object in a way that proves that you knew it all along... but it was a free choice.

All Wayne's routines and adaptations display clear-thinking logic. They're clever and they work! The booklet includes "tips" with extra notes, ideas and variations on some of the routines.

This isn't a large book - in fact it's a small booklet, but the contents is great. No padding. No nonsense.

Priced at £13 including post and packing. To order a copy of Dobson's Choice email: booklet@waynedobson.co.uk for ordering details.