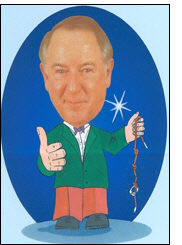 In the introduction to the first book, Reflections, a little over a year ago, Tony wrote that it was the first in a proposed series of three. About six months ago the second book appeared and now here we are with the third. More of the same? Indeed. Can we take any more? I think so. In the foreword, Barrie Savage says, “When you read a magic book you sometimes wonder if the contents are really practical.” He’s not wrong. In fact it’s obvious that a lot of material in a lot of books—and on DVD—isn’t at all practical. The first two books of Reflections were full of workable, performance-tested routines and this latest volume maintains the standard of the first two.

True enough, it’s not the latest four-by-four-knuckle-drive-shaft-shift, so it won’t do for some; but it is fully formed and functional. And for anybody who wants to look beyond the mechanics of a trick, Tony also includes the thinking behind his chosen method and presentation.

Not entirely magic, but a closer relation than some so-called allied arts is what Tony calls The Magic Of Science, a show-cum-lecture designed specifically for schools. Some aspects of this were covered in the earlier books and the show/talk features a lot of the stunts that once-upon-a-time were in every conjuring book written with younger would-be magicians in mind. Anybody remember the knife-in-jar-of-rice? Fill a jar with rice, stick a knife in it and then lift the jar. I could never get it to work and gave up years ago, but it looks as though Tony can. And does. Mind you he says, “When you lift the knife, the jar of rice should cling to it.” The emphasis on the word should is mine.

I recall Harry Lorayne somewhere in Apocalypse having a minor rant about his failure to make this thing work. It was good humoured, but I’m sure it struck a chord with many.

As I noted when commenting on one of the earlier books, surrounding the actual material are many of Tony’s observations on entertaining children gleaned from time spent as both school teacher and magician. If you don’t fancy the science lecture or the stunts, the comments are sound.

Tony is also a busy strolling close-upper and much like the first two books he sprinkles this one with comments and observations on what some like to call the real work of mixing and mingling. It’s not chapter and verse, but the information is there for those who take the time to read the book.

Tony has for many years organised intimate soirees of Close-Up Magic. When Mark Leveridge was in Bath he and Tony did this sort of thing on a very regular and successful basis. He knows what’s what and what’s not and for me a bit more information on this would not have gone amiss. One page was little more than a taster.

As someone who prefers to travel with little more than a piece of rope and a pack of cards, Tony’s philosophy that if it don’t fit in the case, he don’t use it, is refreshing. All of us are tempted to use it come what may, no matter what it may be. After all, if we’ve paid umpteen groats and pieces of eight for the latest phenomenal miraculous whatsit, it’s a statutory regulation that we must use it in public.

If you don’t fancy lashing out on any of the books sight unseen, keep an eye on the magic press. Tony’s always out and about lecturing and if you see him do the stuff—and he does do it—you might be persuaded. Good stuff from a time served professional magician.

Anyway, back at Final Reflections. A fitting conclusion to a trilogy of value for money books.