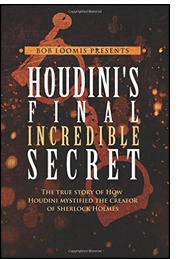 So many books have been written about Harry Houdini that you might be forgiven that nothing new could be added to that vast library. You would be wrong.

Bob Loomis has written a delightful book giving a detailed analysis of the occasion when Houdini created an impossible slate writing effect to mystify none other than Sir Arthur Conan Doyle, the famous creator of Sherlock Holmes. After many years of research and asking many penetrating questions Bob has created an account of how he believes Houdini carried out this seemingly amazing feat. It does not matter whether or not you agree with Bob's conclusions even though he makes a very good case. The writing is engaging and the attention to detail breathtaking. His enthusiasm never wanes despite many dead ends and hours of painstaking study. Bob’s methods of analysis, just like those of Sherlock Holmes, can be applied to many other situations.

Houdini was a great escapologist, of this there is no doubt, but this book reinforces the view that he was also a great magician and scholar as well. He was no saint but it is clear he deserves the reputation that still endures even to the present day. The book is available at a low price from Amazon and should appeal to all magicians interested in Houdini, magic history or just looking for a really good read.