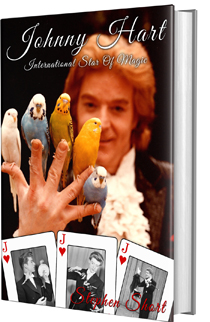 I never really know how to review books. What I really want to write is simply "Wow!" as that was my first impression on unwrapping this huge volume. As a silent magician I've been a lifelong fan of Johnny Hart's act, but never expected such a wonderful book to be produced covering his incredible career in such detail.

There's just so much here, from a copy of his hand written application to join The Modern Mystic League, (Blackburn) as a teenager in 1959: Q: "Are you an active performer?" A: "Yes, I try to be", to tales of him stepping out of a chauffeur driven Rolls Royce Silver Cloud II centre ring at the start of his act at Schumann Circus in Copenhagen. How's that for an entrance! (The Rolls then returned at the end of his act to collect him, circling the ring before exiting.)

Stephen's biography is a real A-Z of Johnny Hart's career. The author has managed to uncover so much detail, so many stories, and so many previously unseen photographs. Quotes from Newspaper reviews and performers that Johnny worked with are intermixed with details of places and performances so that a very full picture of Johnny's globe trotting career soon comes to life.

From Bill Stanley's (Harry Stanley's son) introduction I was captivated. This is a wonderful book, not just for fans of Johnny Hart, but for lovers of magic and showbiz. Wow!

"From the moment Johnny Hart won the very first Magic Circle Young Magician of the Year Competition in 1961 his career took off on a rapid upward path which never slowed down. Harry Stanley became his mentor and manager, and although Johnny was a young man, still in his teens, his natural skills were honed, harmonised and finely tuned, so that he could perform faultlessly with an air of exceptional professionalism.

It was not long before Johnny Hart was in demand to appear on stage in variety shows and summer seasons, supporting some of the biggest names in show business. In between British engagements, Johnny carved a name for himself all over the world, including Las Vegas, where, for a one-year season he entertained at the Dunes, followed later by another extended period at the MGM Grand in Reno, Nevada.

Johnny also became a regular television celebrity, appearing on Sunday Night at the London Palladium and in America he was televised many times on The Ed Sullivan Show.

Johnny’s massive popularity constantly kept him in demand, and he remained at the peak of his career for over thirty astonishing years. This book reveals how a modest college student from Preston, via a path of dogged determination, energy and unbounded talent, became one of the greatest British-born international magicians there has ever been. This book will be a magnificent addition to any magician’s library and will provide an insight into Johnny Hart’s fabulous career."