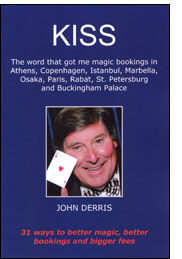 John Derris has a straightforward philosophy when devising his commercial magic: it is to make sure that all of his tricks are visual and simple to do. He calls this the ‘KISS’ principle (Keep it Simple Stupid). The resultant tricks which he details in this book certainly fulfil his intended criteria; and although nothing especially new in terms of effect, his methods and presentation of the eight tricks are universally excellent. You can tell that all of them are thoroughly practical and have clearly been used by the author with great success.

They are all close-up (although some might consider the production of a bowl of goldfish a stage trick, John does it in parlour settings): and only one involves cards – a version of the Devano Rising Cards. Three others involve rings of some sort and I was particularly impressed with his Welded Bliss, a real stunner. Coin in Bottle, production of a coat hanger and a very effective pen penetration make up the others. All are well explained and illustrated; and any of them would be a great addition to someone’s professional repertoire.

The way the book is set out, the tricks are almost a secondary factor. John feels that KISS can be applied to all areas of your magic - from your image to your advertising material - thereby not only bettering your magic, but also generating superior bookings and bigger fees. He mentions several means of self-improvement: amongst which are persistence, practise and “keeping the big picture in mind”. But he does tend to deal in generalisations – I would have liked to have had more honed advice and ‘real world’ examples.

That is not to say there aren’t a few specific tips which, if applied, might well increase your fees and your number of bookings; these seem to be ones that John has been told about or read in other books. His own insights tend to come from his previous career as an advertising executive.

John is somebody I know quite well and I can vouch for the fact that he certainly applies his own philosophy in the field of positive thinking. He is always upbeat, enthusiastic and has a great sense of humour, examples of which are given in the presentation of some of his tricks. However, as a natural salesman, perhaps he has rather over-hyped what this book can offer in terms of substantially improving your overall career.

My advice is to buy the book for the excellent tricks – if you get more out of it than that (and some magicians certainly will, and already have), treat it as an unexpected bonus.