Magic Shows: 30 Years of Programmes from Daniels to Derren
by Ian Keable

Limited to 500 copies, hard back, 192 pages, over 130 illustrations, full colour throughout.
Reviewed by David Britland 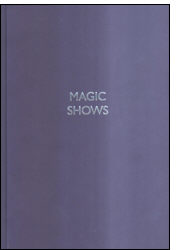 The full title of Ian Keable’s latest book is Magic Shows: 30 Years of Programmes from Daniels to Derren. It is a contemporary version of classic pamphlets such as Max Holden’s Programmes of Famous Magicians. When Ian first mentioned the idea to me I had my doubts. Only historians ever showed interest in books of this kind, most probably thinking that a listing of tricks performed by long dead magicians isn’t of much use. Magicians tend to be more interested in the latest trick than a tried and tested one. And a book that didn’t even explain the tricks was probably very slow to sell.

However, now that Ian Keable’s book is finished its value is readily apparent and you wonder why no one thought of doing this sooner. Put simply, Ian has detailed nearly 60 shows of contemporary performers. They range from magic shows in comedy clubs and festivals to magic societies and West End theatres. For 30 years Ian has been watching those shows, collecting the programmes and making detailed notes about what he saw. The insight his notes provide into the contents of the modern magic show is amazing. Not only does Ian describe the effects but he often includes little bits of patter and notes on the staging and production. Ian’s notes were also supplemented by the generous help of the performers themselves, many of whom Ian consulted to ensure that the details were correct.

The book includes some very famous names from Paul Daniels and Derren Brown mentioned in the title to David Copperfield, Wayne Dobson, Simon Drake, Ricky Jay, Geoffrey Durham and Penn & Teller. Some of the performers have more than one show and it’s interesting to see how one compares with another. Or how they influenced others that followed. Less well-known but equally important shows are also included, such as Simon Drake’s Secret Cabaret Live production in 1992, David Berglas’ Evening of Mystery and Imagination from 1991 and Paul Kieve’s remarkable effects work on The Invisible Man musical which, incidentally, is due to be revived in London very soon. The book is copiously illustrated, much of it in colour, with photographs and ephemera relating to the productions and is a vast improvement on previous forays into this genre.

If you saw the shows in question, the book will bring back memories. If you are an historian, it will be a very useful resource. But Magic Shows is more than a history book. It is an extremely useful guide for anyone dreaming of doing their own show. Because here you will discover how some of the leading professional magicians have arranged their acts, from the all important opener to the, hopefully, rousing finale.

Not much has been written on how to actually stage a magic show. We’ve all read theories about starting with a flashy opener and building to a grand finale, but there are no lists of openers and finales that we can consult. There is no guide to how to build a show or plot a sequence of effects. Or regain your authority when you open that second half.

The reason for this lack of information is that every show will, we hope, be different. And each performer will have their own individual approach to constructing an entertainment. But while no general rules can be drawn great examples of successful shows can act as inspiration. And that is where this book succeeds. Magic Shows is hugely inspirational. Anyone planning their own show will find its contents immensely helpful. Though hopefully not so helpful that they simply pinch another person’s act!

Magic Shows is a hardbound book of 190 pages printed on smooth stock and photographically illustrated in colour. The shows are described in chronological order, from Paul Daniels at the Prince of Wales Theatre in 1981 to P. C. Sorcar Jnr at Alexandra Palace 2010. There is also an alphabetical index so you can flip quickly to your favourite performers. My only gripe is that it should have had a dust jacket. In fact it deserves a dust jacket. On the other hand it is priced at a very reasonable £20 plus postage. And as only 500 copies have been printed I’d expect them to sell out quickly.

You can download a preview of the contents and buy the book direct from Ian Keable’s website www.iankeable.co.uk/magic_shows