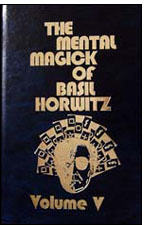 If you have any of Basil's other books, you will know exactly what to expect. At 58 pages, the book is thin and contains just eight effects. So the value of the book entirely rests on the quality of these eight tricks - unlike many of the compendiums available today containing hundreds of tricks, where you consider yourself satisfied if you find a couple you really like. Like volumes 3 and 4, this one is hard backed.

The effects include divining the spectator's zodiac sign, design duplication, and a poker deal. This last may sound out of place in a book devoted to mental effects, but bear in mind that the spectator chooses each card used from a full deck. One I have used already - with great impact - involves identifying a card the spectator has just mentally selected. (I find it works well in conjunction with one of Bob Farmer's Tsunami variants - similar effect, completely different method; those who have both will realise what I'm talking about).

Many of the effects have a body language theme, which can be entertaining and convincing. One effect in particular - one of Basil's favourites - can result in some very strong audience participation, and much laughter. While it is suggested that a book on body language be bought to enable the performer with confidence on the subject, a couple of pages here on the main themes would not have gone amiss.

The effects rely on subtlety rather than complex sleight of hand or expensive props: the props required here are minimal - pencils, elastic bands, playing cards, ESP cards, and envelopes. All are fully described, and it is obvious from the detail provided that Basil used them all, there are no pipedreams. At least one was used to generate newspaper publicity.

Basil died in 2000, a sad loss for magic. As Andy Nyman says in his introduction, he "has made a contribution to the art of mentalism that is as important as that of either Annemann or Corinda." The book was edited by Martin Breese. This probably explains the mildly irritating switch between tenses at points - varying between "Basil has..." and "I have..."

The book has been beautifully produced and is clearly illustrated by David Britland. Given the care that has gone into the quality, I found it disappointing, on putting it on my shelf with the others in the series, to find the spine had been printed upside down! Nonetheless, if you enjoy mental magic, this book is highly recommended, as are the rest in the series.

Priced at £20.00, available from: www.martinbreese.com