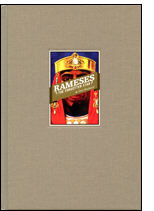 Rameses the Egyptian Wonderworker was an illusionist of the Edwardian era. Born Albert Marchinski in Poland in 1876, he grew up in London in a distinctly middle class home. But as Rameses, he achieved financial and artistic successes beyond the dreams of most entertainers. His fast moving, exciting and colorful illusions took him to the stage of London's prestigious Palladium eight times. In addition, he played England's top theaters and made triumphant tours of America South Africa and Europe. The highlight of his career was perhaps an appearance on the very first Royal Variety Performance attended by The King and Queen of England. Yet despite his theatrical triumphs, it was the stage that proved Rameses undoing.

Little has been written about Rameses' life and magic despite his singular approach to illusions and a career most magicians would envy. Thanks to Chris Woodward's diligent research, his story can now be told. Rameses - The Forgotten Star tells a rags to riches story that ends back in rags that was heretofore unknown. Along the way, readers learn the secrets behind Rameses' illusions (including his spectacular levitation), thrill at his theatrical conquests, and see how quickly that success slipped away.

Award-winning author Chris Woodward is a member of the Grand Order of Water Rats, and a Gold Star Member of The Inner Magic Circle.

"The life of Albert Marchinski [Rameses] was one highlighted by aspirations and dreams that, once attained, could not be maintained. This is the story of one forgotten star's rise and fall - and rise again." In Chris Woodward's Rameses - The Forgotten Star we are taken back to an almost missed period in the history of magic. This is a beautifully produced book that offers the reader an opportunity to delve into the career of this clearly very talented stage magician. What I found as fascinating as the accounts of his shows and financial dealings was some of his routines that had originally been published in the magic magazines of the day, complete with notes on presentation that seemed to be able to turn a standard trick into a spectacle.

I must confess that I haven't quite finished reading Rameses yet, and don't normally go for magical biographies, but the fact that the author's late father-in-law, Maurice Fogel, worked for Rameses towards the end of his career, somehow brings this whole story to life, and I can't wait to finish this tale.

Available signed by the author, at a special introductory price of £30.00 (including delivery), email c.woodward@tesco.net for details.

In the States it can be ordered from your favourite magic dealer, or directly from the publisher: www.squashpublishing.com.