Rara Avis: 60 Years of Magic from the Private Notebooks of Jack Avis 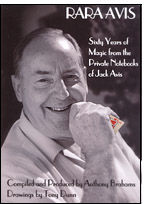 I promise you that I will honestly try and make this an objective review of this new, 220 page, hard cover book as it is generally known that I was related to Jack Avis for over fifty years. But there is one aspect that will determine that my comments will not be too biased for my patch in the magic field is middle of the road performance with a little interest in card magic. On the other hand Jack was one of the greatest innovators and technicians of card and close-up magic who performed publicly but a dozen times in his lifetime.

As has been chronicled elsewhere Jack Avis was a compulsive note-taker writing up details on magic he had seen, ideas, changes and improvements he'd dreamed up as well as notes on lectures by many of the greats that he met on a personal level over the years. Unlike Dai Vernon who admitted that his writings were scant and incomprehensible years later, losing some of the gems that he'd recorded, Jack wrote clear, capital letter notes and thoughts immediately after seeing something, such was his passion for magic and detail. This filled 28 notebooks that we found following his death which but for this publication might have finished in a skip.

Published by Anthony Brahams of The Cairn Press, whose valuable contribution to magic literature has saved many gems for posterity like the books on Rovi, David Costi, Fred Kaps, Al Leech, Roger Crosthwaite, Carl Andrews and many others whose work might have been wafted away in the dust storms of the magic landscape but for his respect for their preservation. He is to be congratulated on producing one of the few hard back books on magic to be published in Britain today.

But to the book. Brahams has faithfully printed effects, routines and ideas in the note form as written by Jack and has personally tried out every trick before committing it to the pages of "Rara Avis." Anything that was obscure or couldn't be worked out has been deleted. He assiduously checked many items and information with distant magi whose work is noted in the book, for accuracy and for permission to publish which was generously given. This includes contact with Peter Duffie, Karl Fulves, Roger Crosthwaite, Roy Walton, Louis Falanga, Martin Breese, Peter Lane and Bobby Bernard. That does not mean that items have been published before but may be developments of magic ideas created by others like Larry Jennings, Dai Vernon, Ed Marlo, Charlie Miller, Eddie Joseph, Rufus Steele, Bro Hamman, Peter Kane, Ken Krenzel, Harvey Rosenthal, Roy Walton, Alex Elmsley, Ron Wilson, Howard Adams, Dr. Daley, Stanley Collins, Al Baker, Ricky Jay, Bill Simon, Ascanio, Jerry Sadowitz and many others to whom reference is made in the book.

If you are a serious student of magic and know the difference between a Cull and a Kelly Replacement then this is for you. Jack was a great devotee of natural magic, slow and simple, just like The Professor and John Ramsay and this book will open up new avenues for you to pursue if that is your bag. Although he was passionate about card magic there is much to interest you in other close-quarter magic. There are 87 effects with cards, 37 card sleights, subtleties and other artifices and 22 effects without cards as well as out-of-the-blue, obscure tips like using lipstick as a daub, Frank Lane's idea of making a wide and long card out of clear celluloid, whitening your teeth with sage and the gambler's dodge of sticking a spangle on your right second finger for a glimpse! It is also filled with many explanatory drawings and unique, personal photographs of Jack and many of the greats of the past, that were discovered when clearing his effects following his demise.

This is a real notebook in which he wrote down anything at odd times that had a connection with magic. Even cornball quotations like - Confucius he say "Man who work shell game may be arrested for disturbing the peas!" And if you are the kind of magician who likes to dive into a publication for ten minutes or so and pick up ideas rather than reading a long treatise on card psychology or a move, then this is your kind of book. As well as sleights there are items with fake cards, banknotes, fake rings, ribbons etc. such was Jack's eclectic employment of method, just like Vernon who was as adept at using a bottom deal as a hook coin or a deck of double back cards. This is not a book of stereotypical method.

I used to sit with Jack about every ten days or so and discuss magic, life, show business, politics, anything, for he was a great conversationalist. I was privileged to see the genesis of many ideas some of which are in the book including a couple that were the result of our joint thinking. This is a man who gave his life to the study and practice of magic. If you spend a few hours with this book, viewing for the first time his hitherto hidden thoughts and notes on his unique and natural approach to magic, I promise you the experience will last you a lifetime.

(In case you're wondering - "Rara Avis" is Latin for Rare Bird which I think is an apt title for this very special magician).