Written and illustrated by Steve Beam 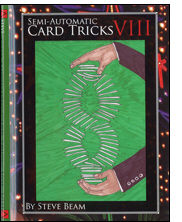 
Clocking up almost 2000 pages, the Semi-Automatic series, or collection, slots comfortably into the substantial and more besides category. Michael Genevie calls it The Tarbeam Course In Magic.

In previous issues of MagicWeek I’ve reviewed the Tony Griffith Reflections series. At various points I made the comment that, in following on from book one, books two, three and four are more of the same; which they are.


However I qualified this by adding that although the comment is reasonably accurate, it’s hardly the truth and certainly not the whole picture. The same sentiment applies to the Semi-Automatic series. Each book is more of the same. And then some.

If anyone is getting a feeling of déjà-vu here, I’m not surprised.


Continuing the theft of mine own utterances, I will unashamedly append the following to this commentary: all the Semi-Automatic books are better than good and this is precisely because each successive volume is more of the same.

As with all decent books, away from the nuts and bolts that are the tricks/routines, there are credits, comments, discussions, observations, and some very interesting patter themes. These dissertations, themes and rambles may not suit anyone who isn’t Steve Beam, but they do provide a foundation to build on. I like them and as for the comments, discussions, observations and credits, well, they’re food and drink hereabouts.

By the same token, of course, not every notion, trick and routine will likely appeal to everybody. How could it? How could they? So, bearing that in mind, I won’t point to anything that I think anyone/everyone should try. That said, I was tickled by the following oddments.

Two Card Monte, from Tom Ransom is an intriguing idea using two same-value cards, with different colour backs. Totally discrepant, it makes use of the pointer feature of cards, although it’s not the Paul Harris Pointer thing that’s been flogged to death here and there.

John Bannon offers Daley Double, a neat and nifty approach to the ace transposition usually referred to as Daley’s Last Trick. It’s the presentation that gets the focus; the technical side of the handling is not described, so if you don’t know the trick, look elsewhere—it’s not hard to find.


The Cut Deeper Force crops up in and around page 205 and the credits are particularly interesting; to me anyway.

And then there’s...no wait a moment. Having said that I won’t point to anything that I think anyone/everyone should try, I’m beginning to do just that. So, well, get the book and try the lot. And there is a lot. Get the whole series. Or at least get it written on your Christmas stocking list.

Available direct (and currently only) from Steve Beam at www.stevebeam.com. Price $55 plus $28 shipping.