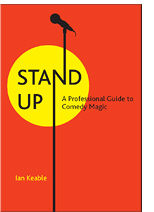 If you've always dreamed of being a stand-up comedian (or a sit down one) or a comedy magician or just "more funny", take it from me: don't copy other people's acts, don't go on one of those hideous "how to be a comedian" courses and don't buy any books... other than Ian Keable's 'Stand Up: A Professional Guide to Comedy Magic'. It will be the only thing you need.

I'll be honest, the price of the book did make me hesitate. Cockily I thought: "do I really need to buy a book on stand-up comedy?" It is, after all, my job. I make my living as a comedian and tour a one-man theatre show each year. The last two tours have sold out. But I still learnt from this book, found it incredibly entertaining, an addictive read and quite honestly the best technical book on comedy I have ever read. I believe this will be a landmark book in its field and Ian deserves for it to do very well indeed. Ian's colloquial and easy-style reads more like a personal conversation with him than a dreary tome of do's and dont's. And £25 for a personal lesson with a successful and working comedian would be cheap at half the price... or even double. And Ian is clearly not only a successful comedian but a learned one at that. The book gives the impression of many, many years of not just slogging away until it seemed right for him, but of analysing and thinking about what works and WHY. A lot of research and time has gone into this book; it isn't just a 'back of the room' product peddled as a side-line for a jobbing comedian. This has heart and soul... and a lot of clout.

It's an excellently produced book with hardcover, dustjacket and some awesome colour photos. But it isn't just a flashy LOOKING book. The content is superb. Invaluable even (which makes £25 even more appealing). It's not often that you can read a book on the technicality of a subject that doesn't get too heavy, oppressive and over-analysed. Ian strikes a perfect and rare balance of theory, experience and technicality - all in an accessible tone. When I say you won't need anything else, I mean that literally. Ian's book covers every aspect of performing as a comedian - or as he terms it 'comedy magician'. As a comedian can do magic and a magician can be funny I think the edges can be blurred for the purposes of this review... I just hope Ian doesn't read it as he has a fairly excellent definition of both. Tone, content, delivery, presentation, style, marketing, venues, structure, using volunteers, handling audiences, opening lines, preparation: I could go on but it is all in here.

The many, many examples, quotations and insights from top comedy magicians from around the world are priceless and reinforce Ian's own thoughts on the subject. He graciously shares ideas, lines and business from his own material and that's where this book really stands out above anything that has been written before it - you are able to access a wealth of information; so many thought processes; so much development, techniques, understanding and working experience of being a successful and identifiable comedian.

Even if you already work as a comedy performer, it makes for an interesting, at times inspiring and thought-provoking read. In a review such as this, I would normally make a point of referring to particular chapters that I found most useful or specific things I'd learnt. But it's all good - every page; and that's what provoked me to right this.

You need Ian's book and an understanding that it all begins with you...

I have no conflicting interest and buy many, many books each year on various subjects. Ian's book ranks in my top 5 for this year of the 38 books I've bought so far.