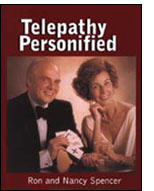 After several years of delay, for one reason or another, Ron and Nancy Spencer's book 'Telepathy Personified' has now made its grand entrance. Martin Breese has done them proud and I must confess that my first word on opening this package was 'WOW'!

The Spencers have used the photograph reproduced on the dust wrapper as a publicity photograph but this was the first time I had seen it in full colour. Their radiant smiles beam out at you and you can't help but like them!

American mentalists will no doubt remember Ron and Nancy from their performance at the 1995 PEA convention in Seattle. They were rewarded with a standing ovation there and Ron certainly deserves one for his lucid explanation of their two person telepathy act(s) described herein. Nothing is kept back and their techniques are very simple, starting with the easy to learn basics and then progressing for those who are hooked on this type of presentation. Nothing is held back - if you have seen the Spencers perform a particular item then here it is, fully explained.

For over 50 years, Ron and Nancy have charmed their audiences and graced magical gatherings with their presence. I confess to knowing them for over thirty of those years but that does not diminish my admiration for them and their professionalism. Ill health has forced their retirement and this book will serve as a memento for those who have known them and an inspiration for those who would like to emulate them. At £20.00 this is a bargain compared to the extortionate amount asked for a similar type of book about 30 years ago. That was a rip-off but this is a steal.....