The Life And Afterlife of Harry Houdini 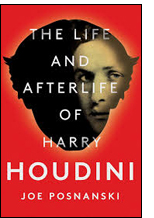 This is a breezy account of Houdini’s life and the continuing interest in the great escapologist into current times even so long after his death in 1926.

It is written in a journalistic rather than an academic style – the author is an award winning sports writer. The narrative is not chronological as the author jumps around between various topics of interest setting them within contemporary comments where possible. In the bibliography he states that he referenced 212 different Houdini and magic books and read more than a thousand newspapers and magazine articles. In addition he watched dozens of documentaries, films and television shows. He interviewed many contemporary Houdini scholars. So, his research was thorough. There are no new disclosures but the author’s analysis of well-known events in Houdini’s life is informative and he does not go in for some of the more outlandish theories that have graced Houdini interest over the years. His comments about the magic community today are also refreshing as he has interviewed many people with an interest in Houdini. It is pretty much impossible to separate fact from fiction when studying the life of Houdini but the author makes a very good attempt to do so.

Recommended reading for all those with an interest in Houdini “The Myth Maker”.