It proved to be another bonanza weekend for the 3500 magicians who attended the 59th Blackpool Magicians’ Convention. There was so much to see and do delegates were spoiled for choice. My apologies for names and events missing from this report but it is impossible to cover every event in detail and I have made no attempt to do so. The answer is be there yourself, then I will not have to write a report! 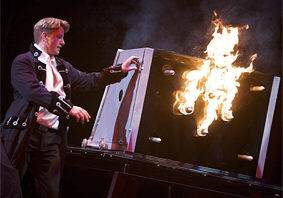 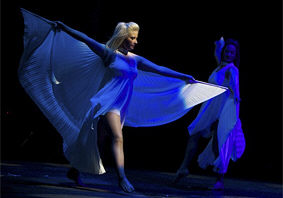 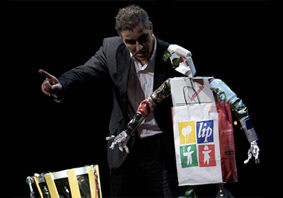 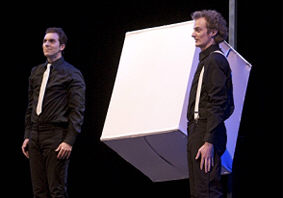 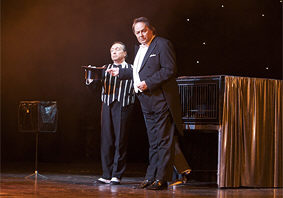 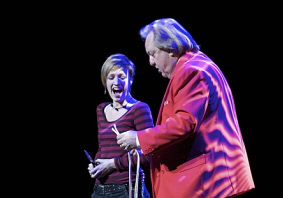 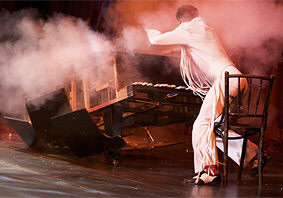 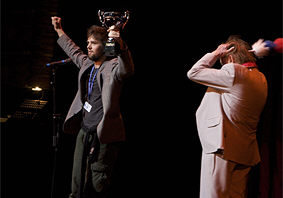 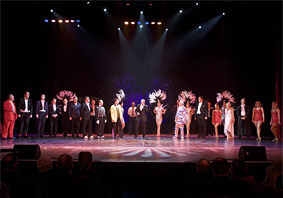 I popped in to see the auction on Thursday afternoon and bargains were being snapped at a fast rate thanks to the auctioneering skills of Derek Lever and Mike Shepherd, aided by a band of ‘delivery’ people to carry the goods to the successful bidders. There were plenty of bargains to be had and I estimated that some 2000 items went under the hammer which must have raised a tidy sum for Blackpool Magicians’ Club.

The FISM European Magic Championships was a marathon of magic with so many entrants it had to be split into several sessions. I saw very few of the acts but waited for the All Winners show on the Saturday.

Derek Lever welcomed the audience to the All Winners Show and presented Lifetime Achievement Awards to Eric Eswin, Derek Bressman and Domenico Dante.

After the introductory speeches and presentation of awards the first performer was Vittori Belloni, winner of the Close-up 'Micro Magic' category. Among his offerings was a coin matrix using invisible coins and see-through cards! He finished with a bizarre pseudo striptease. Next came the winner of the Close-up 'Cards' category, Miika Pelkonen from Finland who presented superb and inexplicable card magic.

One of the strangest acts I have ever seen was that of the French performer Yann Frisch, winner of the Close-up 'Parlour Magic' category, who was also voted the 'Most Original Close-up' act of the close-up competition. It was absolutely manic and impossible to describe as balls kept appearing on the table as fast as Yann could get rid of them much to his bafflement. Another French act was Cubic Act, winners of the Stage 'Stage Illusions' category. The act centered around an animated box which was obviously too light to contain anything - until a girl was produced from it, then the two male performers did a quick colour change of their costumes to end.

Towards the end of the first half the show was marred by the dissatisfaction of a section of the audience with the compere’s approach and material. I have never seen such a hostile reaction from an audience (whether justified or not) and I hope I will never witness anything similar again.

The final act in the first half of the show, winner of the Stage 'Manipulation' category, Dion from The Netherlands, opened with the transformation of a light bulb to a candle, colour change silk, a flower production and the change of a silk into a ball which then changed colour leading into a multiplying ball routine and the production of card fans in a flamenco-style presentation.

After a short interval the second half of the show, sans compere, was opened by Christian Bischof of Switzerland, second in the Stage 'Mental Magic' category (first prize not awarded) who showed how man and woman can communicate telepathically.

Charlie Mag from Spain, winner for Stage 'General Magic', worked with doves, cards and goldfish culminating in a vanish of the doves in their cage. The ever popular High Jinx, second in stage illusions, opened with the transformation of two dummies into Michael and his sister Siobhan. They then performed a synchronised and entertaining double strait jacket escape before jumping into a cabinet to change back into the two dummies.

As a bonus Richard Osterlind baffled us with his unique style of mentalism, bending spoons, divination of cards and a magazine test, and Tom Anders produced cigarettes, cards and water from two bowls.

This year the organisers provided excellent video facilities, the best I’ve seen, which meant that everyone could see what was going on and it was even possible to get a seat!

To open the first session Michel from Argentina performed various card revelations, and an astonishing cut and restored rope (which he explained in his lecture) and a card at any number routine which certainly got me thinking.

Then came the very popular Jay Sankey. He performed various card tricks including a fascinating torn and restored card in which a torn off corner of the card actually reappeared ‘inside’ the card itself! This was followed by a baffling borrowed ring and spoon penetration, the production of coins, a coins across routine and two playing cards were torn and restored.

The American magician Michael Rubenstein performed mainly with coins with a production of coins, coins across, the vanish of three coins, a copper/silver routine, coins across using a purse and a glass and a coin ‘substitution trunk’ (the ‘trunk’ being a nest of metal boxes).

Bernard Billis from France is utterly unique and his work with cards is amazing. There was a signed ‘three cards across’, an intriguing ambitious card routine with a pack of blank cards, and a couple of four ace routines.

Craig Dickson, a Blackpool regular, opened with a signed card in wallet before cutting to freely selected cards. He then showed a small device with several coloured lights and switches in which the same coloured switch always illuminated the bulb of the same colour even though switches and bulbs were moved around constantly.

Jupiter, another regular at British conventions, performed several rope effects before moving on to coins and then cards.

The final performer in the second session was Richard Sanders who transposed the corner of a note with a packet of chewing gum, repeatedly produced cards from his mouth and performed various card routines.

There was something for everyone with the lectures on offer. Unfortunately many of these clashed with other events so delegates had to make a choice as to what they wanted to see. All of the lectures I saw were well attended, particularly that of Jay Sankey where the Spanish Hall was so packed there was not even room to stand! Wayne Dobson’s lecture contained some real gems but his personality was the real highlight of the session.

Tom Anders gave an in depth session of tips and techniques on front and back palming.

Craig Dickson’s talk was magnetising, literally for his subject was on the use and possibilities of PK magnets. Fascinating stuff.

Richard Sanders provided his audience with a miscellany of entertaining effects with objects such as rope, blank papers and even lottery tickets.

After showing a short promotional video and the production of two doves James Dimmare opened the floor to questions all of which, including a couple of potentially awkward ones, were answered with honesty, openness and sincerity.

Richard Osterlind talked about the principles of mentalism and his approach to entertaining with this type of act. He then explained his spoon bending routine, a neat centre tear and an effective prediction using a nail writer.

One of the highlights of every Blackpool convention is the International Gala Show on the Sunday evening and this one was superb. Comperes for the show were the crazy Clive Webb and his equally crazy son, Danny Adams. Thankfully they did not perform their wallpapering routine in which everyone in the front four rows gets soaked in gunge - although I did get a slight amount of water over me in one of their madcap routines!

The elegant and sophisticated Scott Penrose opened the show with his immaculate manipulations, dove productions linking rings and a snowstorm.

Derek Lever, was cajoled on stage to perform a cartwheel. It turned out to be half a cartwheel. He may be a brilliant Convention Organiser but, on that showing, he will never be an acrobat.

Jimmy Tamley proved to be an excellent ventriloquist with a wide range of dummies and a variety of voices. I have no doubt that he will be invited back.

Showing how recycling should be done Xavier Tobias constructed a robot from bits of rubbish. A intriguing, entertaining and most unusual act.

The sophisticated artistry of Dimmare treated us to traditional magic with vanishing and appearing canes, multiplying candles and produced smoke from his thumb. He also performed an excellent zombie routine in which the ball vanished at the end and a double salt pour.

To round off the first half we were treated to another form of magic, the magic of tenor Victor Michael. He is such a superb singer his talents deserve better recognition.

In the second half of the show the Murray Award was presented to Registration Officer, Arthur Casson, and the legendary Roy Johnson. The Ken Dodd Award for Comedy was given to the crazy Yann Frisch. A new award, the Neville King Award, in honour of the late and great ventriloquist, for a speciality act was given to Mark Raffles.

From the Ukraine came Roy Gardner and James in which the pompous magician is never successful but his butler performs most of the actual magic.

Although I had heard of Michael Finney I’d never seen him before. The effects were standard but put over with a humour that showed his wide experience.

Salvano jr (Tom Anders) presented the act made famous by his father with the multiple production of glasses of drinks as well as card productions, a cigarette routine and the transformation of a large silk into a cape.

An act new to me was Jonathan Hawley with a multitude of illusions including a sensational levitation of a girl and himself rising up to her level high above the stage.

The show finished with an exciting dance routine by The Dolphin Dancers featuring the magnificent voice of Victor Michael, a spectacular display of water fountains and a parade of all the artistes - a fitting and exciting climax to a great show.

Dates for the 2012 convention are 17th, 18th, 19th February and registrations are already pouring in. No way can Convention Organiser, Derek Lever and his band of merry helpers surpass 2011 - but I bet they do.

Their work load will be even greater than usual for they also have to organise the FISM World Championships, 9th to 14th July 2012. It seems an impossible task but no doubt they will achieve it with their usual dedication, hard work and aplomb. So confident are magicians world-wide in the success of this event that half the tickets have been sold already!