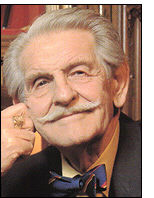 This was a poignant evening filled with archived film clips and a plethora of names who shared their private memories of one of the greatest magical personalities of our time – the world’s largest leprechaun, Billy McComb.

John Wade told us of meeting the great man for the first time at Lime Grove TV studios. He also displayed an example of Billy’s candle making – a large Buddha which still exists to this day as Billy had forgotten to add a wick!

Alan Shaxon told of looking up to Billy and his greatest friend, Robert Harbin. He was indebted to them for their advice on cruise work – the three of them often followed each other on the larger boats. On one occasion Billy arrived on board a few days early and greeted Alan each morning in his cabin with ‘another trick you can do in your act!’

We saw many clips of tributes paid by American magicians during the Magic Castle’s McComb tribute. Bryan Lee, stage manager of the Magic Castle theatre and husband of Mystina, Milt Larsen, Penn and Teller, the Amazing Jonathan and Lance Burton all told anecdotes of great interest.

Harry Reeve described the time that Billy was magical advisor to David Nixon. Harry had invented a trick, Treasury Transpo, which utilised two Perspex sheets and a bank note. Billy instructed the prop builder at the BBC to make up David’s version of it but his instructions were not clear enough and the result was measured in feet rather than inches! However to spare Harry’s feelings, Billy never told him the story for twenty-five years.

A Pathe film was shown featuring Billy at his home in Edgware in the early 60s. This was a personal moment as I knew that house very well indeed – Billy had sold it to a couple who became family friends and I had taken Billy back there for an unforgettable visit around seven years ago.

J.J., a past member of The Magic Circle and editor of Opus magazine, told of how he was booked to perform at the society’s annual banquet and assumed it was similar to a club night, only to discover, on arrival, that everyone was in evening dress whilst he was not only improperly dressed but under-rehearsed - causing him to die on stage! He would never forget the phone call of support he received from McComb the following day – a mark of professional understanding.

Patrick Page was unable to be present but, in a video tribute, told how he shared a room with Billy and wasn’t allowed back into it late one night unless he performed a trick. Mac King, likewise, explained how Billy was responsible for the signature appearance of Fig Newton biscuits in Mac’s act. Johnny Thomson stated that Billy always started a conversation with a date ‘Did you know in 19…!’ Billy had also spoken of how Al Koran’s ashes, when ritually scattered by Billy, had blown back at him in the wind; he declared this ‘disgusting - but my mentalism improved!’

We saw several clips of Billy performing: his match trick, Gypsy Thread, Coin in Bottle, some silent magic and an early screen test for television which showed Billy as a personality rather than a magician.

Noel Britten, who organised the entire evening, spoke humbly about being in audiences of small groups when Billy talked; jumping from one subject to another with seamless enthusiasm. Edgar Benyon was Billy’s mentor and we were advised to read his tribute to Edgar and that these words were just as relevant to Noel’s view of Billy.

Magic Circle member Timothy Dill Russell had come over from Spain to tell how, owing to his late night conversations, Billy had missed a plane one morning – and escaped a fatal crash. We heard emailed messages from Simon Lovell and from Robert Child who is currently writing a definitive McComb biography.

Members of the audience included Lew Lane representing the Water Rats together with Pat Sharp, widow of Joe Church.

Billy’s lady of twenty-two years, Annabel, spoke of the sea lion with whiskers, which over-saw the scattering of the McComb ashes, making all those present believe it was the man himself reincarnated. She presented the museum with some memorabilia.

The final tribute came from Terry Seabrooke, Billy’s lifelong friend, and the evening ended with Billy’s last TV appearance, on the Keith Barry TV show in Ireland, a 2005 performance of the vanishing bird cage.