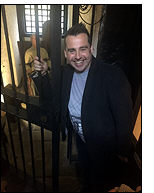 Last Sunday was the Northern Magic Circle President's Day (www.northernmagiccircle.org.uk), hosted by the president Danny Hunt and president's lady Stephanie Clarke and what a great day it was! Danny and Stephanie had organised a tour of all the museums in the Ripon museum trust. Starting at the courthouse museum, followed by a visit to the old Ripon prison. This of course was a favourite location for many of the Northern Magic Circle members, as this was the prison where on October 31st 2006 Danny Hunt himself broke out of number one cell of the old Victorian prison. Danny made his escape from the cell having had a strip search by a doctor, and being bound in chains and a straitjacket.

Danny escaped in full view of the onlooking audience to mark the 80th anniversary of Houdini's death. Not only did Danny escape but he also locked a police officer, who was guarding the cell into the cell he had just escaped from.

On his return to the cell during his Presidents' Day, following a comment from a member regarding the possibility of breaking back in the prison, Danny couldn't help himself and all the members stood and watched him pick his way IN to the cell he broke out of! Brilliant well done Danny.

Then it was off to the workhouse museum to watch Haldane of the Secret Service, one of Houdini's films. This was on the big screen and to the delight of the audience Danny and Steph had organised popcorn, drinks and sweeties to munch on throughout! During this fabulous packed day, in front of a large crowd of visitors at the workhouse museum Stephanie Clarke presented an impossible escape from small aluminium box!

Members of the Northern Magic Circle even had the chance to get dressed up in period costumes and really get involved with days events.

For anyone looking for something to do during the school holidays, Ripon museums trust is well worth a look with lots of planned events during the summer visit www.riponmuseums.co.uk for more information. You may even catch Danny and Stephanie of Amethyst making a special visit during the next few months for more information on upcoming events or to catch Amethyst brand new escape show for 2015 contact Stephanie at www.amethystmagic.com.