Movies at The Magi
The Order of The Magi Annual Dinner 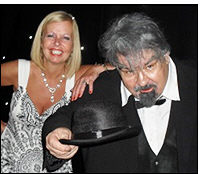 The Order of The Magi annual dinner was held last Saturday (22nd March) at the Irish World Heritage Centre in Manchester. By way of a change this year it was called The Magic of The Movies allowing people to dress as their favourite movie star or character if they so wished. We had an Oddjob and Pussy Galore from Goldfinger, Audrey Hepburn, Dr Dolittle, Superman, Rick (from Rick’s Bar in Casablanca) Mr. Tumble (from children’s TV, Superman, and representatives from The Jewel in the Crown and St. Trinian’s. Some guests though decided to merge into the background as extras! I took on the role of Film Director – not seen in front of the camera!

Dave Taylor President of the Wolverhampton Circle of Magicians proposed the toast to the Magi with wit and humour on regional dialects. The cabaret was in the capable hands of vocalist Cooper, the magic by Elemental (Jay Gatling and Amelia) and Dave Andrews and ‘Jessica’ providing the honed to perfection vent routine.

It was a good evening out all round with a lot of work carried out by a very few people, but when these occasions bring so much pleasure to those attending it makes it all so worthwhile.