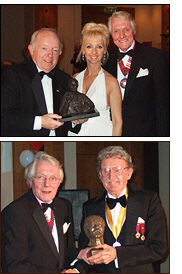 An undoubted jewel in the crown of The Magic Circle is the Annual Awards Banquet. This year’s event proved to be a whole crownful of jewels.

It was a glittering night of wining, dining, dancing, close-up and cabaret magic, plus the Awards Ceremony itself.

Some twenty of The Magic Circle’s finest visited the tables to delight the guests with tip-top magic right under their noses.

The all-star cabaret boasted no less than the hilariously quirky Richard McDougal, complete with goose, the tremendous illusions of Martyn James and Co, and the fabulous Royal Command Performance magical quick-change act of David and Dania.

Guests of honour were Paul Daniels with Debbie McGee, and Jeremy Beadle.

The Magic Circle Awards for 2007 were presented as follows:

Maskelyne Award for services to UK magic to Mark Raffles

The Magic Circle Annual Awards Ceremony took place at The Holiday Inn, London, WC1 where the ambiance, the service, and the food were perfect.