The Family Festival of Magic 2017 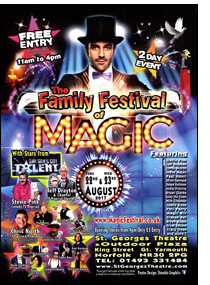 This was the first festival of magic launched in Great Yarmouth and the feedback from crowds attending was very positive, so positive that a second festival is in planning for 2018. The setting for this year's festival was in and around St Georges Theatre in Great Yarmouth. This provided a fantastic area for the festival as well as the use of the theatre for the late afternoon shows. The festival started each day at 11am with outside performances from Joshua Pickering, Jamie Rose, Steve Majes and Daniel Dee, they provided a great combination of comedy magic, escapology and ventriloquism to draw the crowds. From this point both days then celebrated the tradition of Punch and Judy, with hilarious performances from Bryan Baggs and Bryan Clarke. It was great to see the reactions these two talented performers generated from the children and the adults, with many audience members staying on for the second show later in the day. Magic was happening all around with mind reading fun from Oliver Garwood in the main performing area while Andy The Clown captured the young and young at heart with his crazy antics on the fringes.

Throughout the two days there were close-up magic performances from Nick Chapman, Ned Potts, Don Simpson, Robert Rathbone, Graham Bull and Kyle Sarocen as well as balloon twisting from The Tricky Twister, Nick Twist, Andy The Clown and Jeffery Drayton from Britain's Got Talent. There was never a dull moment!

Over the two days there were a couple of afternoon shows in the theatre; one from Don Simpson with his ‘Medicine’ show based on the quack traveling doctors of the past and a show from The Great Banana. Daniel Forde-Pogson writes: The Great Banana’s content and delivery was smooth and well-rehearsed, mixing a combination of mimed comic magic with great audience participation and, for me, just the right combination of humour and surprises. The magic was really great from a lovely routine where a cane vanished to a final, all-inclusive, full on card trick, all nicely banana-themed!

The afternoon's raced past from one performance event to the next and along the way we had a great vocal performance from songstress Tracy Dean and a surprise unscheduled visit from Steve Hewlett, yes that’s right, the multitalented ventriloquist Steve Hewlett popped along and gave an impromptu performance much to the surprise and delight of the crowd. Steve was headlining at the Britannia Theatre and had heard about the festival.

Each days afternoon events finished with a stunt at 3pm, on the first day we had Oliver Garwood, Steve Majes and Joshua Pickering competing in a straight jacket escape race and on the second day Steve Majes battled to escape from chains and shackles while secured in a US mail bag before his phone was smashed to smithereens. These events drew great crowds and were a great lead in to the late afternoon theatre shows.

At 4pm each day the stage was set and the audiences were seated for the festival finale. On day one we had Joshua Pickering holding the reins as compere and introducing Phil Perry to open the show, Phil was much loved by the family audience and performed a great combination of classic effects finishing on a fabulous rising card routine. Steve Majes was second with a fun bending mirror routine that received gasps as it was folded in half, and then he had a very interactive routine with help from a young volunteer where they made and then tried to catch a ghost. There was now a short interval and on returning we had Britain's Got Talent star Jeff Drayton and Chantelle “I don’t want to go in the cannon!” After a short interview conducted by Steve Majes, Jeff went into his hilarious routine involving a cannon and his puppet Chantelle where she flew through the air to find a chosen card, all this was done while Jeff was on roller skates. Joshua calmed the audience down and introduced the final Britain’s Got Talent star of the day Stevie Pink. Stevie provided much hilarity with his psychic routine along with his take on the masked magician, the mask was of course pink! As well as his comedy skills Stevie also showed his magic skills with a great multiple cut and restored rope routine to music and finishing on a stage filling dancing handkerchief routine all delivered with that pink flare.

On day two we had compere and performer Paul Henri open the show with his ventriloquist act involving George T Monkey, Paul’s experience shines though as all at once he had the young and old in stitches at George’s antics. Paul then introduced Stevie Pink who was returning for a slightly abridged second performance, again Stevie had the audience under his pink spell and was a fabulous finish to the first half. After the interval Chris North took to the stage with gusto and presented a fantastic family magic show full of visual effects and audience participation. Rick Martyn writes: Chris took to the stage and instantly the audience warmed to his easygoing manner. His routines were polished, professional and spot on. Equally at home working with the adults or the children, Chris performed strong magic in a style that seems to have been lost by a lot of performers today. I believe it was the late Ken Brooke that said, “magic is as much about the journey as it is the destination...” Well, the journeys that Chris took us on last night were very enjoyable indeed. I am already looking forward to watching the show again next year!

Chris really brought the first Family Festival of Magic to a great close with many happy faces leaving the theatre and remarks that they would definitely come back to the festival next year. A big thank you goes out to all the members of both ‘The Gathering’ and ‘The Anglian Magic Society’ that took part in the performances and back stage work and to Tony Hawkins who was paramount in the publicity and stewarding side of the event. And lastly both societies would like to express their great thanks to Kyle Sarocen and Stephen Bolam for creating, organising and running such a fantastic event that will benefit both societies and many local magicians.