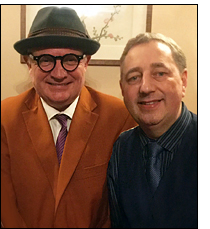 Mel Mellers is a man well known within the magical fraternity. His acerbic wit and caustic put-downs, all done with a glint in his eye, have been experienced by many. “I like what you did with your hair... nothing”.

What people don’t necessarily appreciate is the work put into the routines, jokes and witticisms. Comedy writing is something that is a struggle for many of us and is a very useful weapon in any performer’s armoury.

At the end of October, in an idyllic hotel just outside Colchester, Mel hosted his Comedy Magic Academy with 30 or so delegates. The event was superbly organised by Steve Short and lasted well into the evening culminating with ‘An Audience with...’ We were also introduced to his occasional writing partner Catherine Jarrett, a lady who knows how the mind of Mel Mellers works more than most and who often colludes with him on projects.

The course was extremely in-depth, covering the mechanics of comedy and how Mel goes about writing his gems. He explained how he fills several journals with ideas in a year, and the tips he uses to turn an idea into a routine. An insight on how idea generation evolves into workable routines was littered with great ‘Eureka’ moments which saw the fog lift in one’s comedy brain.

Delegates were asked to bring a routine from their repertoire to perform: either an established one that could be examined, critiqued, polished and improved upon, or a new one where the performer needed help in turning an idea into a professionally polished performance piece.

During group exercises, the comedy do’s and don’ts that Mel was keen to highlight became apparent, and each person understood more about the principles behind convergent and divergent thinking. The ‘Joke Web’ is something that was scribbled down by many, as everyone could see the simplicity, yet the importance of utilising something that could help structure the plot, gags and script for any routine.

One particular nugget of information that was imparted was the concept of ‘branding’. This is about how, through branding one’s act, we can turn from being ‘A’ comedy magician to ‘The’ comedy magician that our bookers want.

A fair proportion of the time was spent on the importance of the plot. Without a decent one, all the comedy writing becomes a jumble of gags loosely linked to the trick being performed. By working out the necessary plot, the script becomes easier, and more relevant, but there was also a lot of fun with the gag writing portion, where delegates came up with some very funny alternative meanings to words.

During one exercise, we were each given a card at random with a commonly performed magical effect, such as uneven ropes, or torn and restored newspaper, and we were asked to ‘re-imagine’ the standard trick and come up with our own routines. It certainly got the creative juices flowing and some genuinely good, workable ideas came out of it.

With lunch and dinner thrown in, and opportunities to chat with performers from across the genre, the day was an extremely worthwhile venture for anyone wanting to improve their comedy writing skills. It was a great way of seeing how the Mel Mellers character and brand thought and worked, and the methods he uses. This wasn’t a lecture. It also wasn’t like an acting class by someone who no longer treads the boards. This was a masterclass by a successful, hard-working performer at the top of his game.

There is a train of thought that puts a value to conventions, lectures and courses. That particular way of thinking subscribes to the belief that if you come away with one significant trick/routine/piece of information, it’s value for money. Well I came away with a completely new routine, plus the potential for another, and 2 major improvements for something I do already. More importantly, the tools and mindset to be able to sit down and formulate an original and funny take on anything I put in my act, rather than relying on the stock routine that comes with it that everyone else will be doing. So from me, the course gets a big extending thumbs up.

Wyn Jones is a professional comedy magician and also a children’s entertainer performing as Mr Merlin.