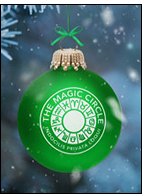 Unlike most theatres, The Circle show is a show before the show. The doors opening an hour before the main event give the audience the opportunity to explore the building. In addition to visiting the museum, there's the superb close-up magic of Richard McDougall in the club room, while the Devant room hosts Dominick Zwolinski's cons and scams at The Bunco Booth, and David Crofts' masterful 160 balloons and cardistry (yes he's been doing it long before the recent trend and as he has a family to feed makes it engaging and entertaining). It's safe to say the audience have their money's worth before they step into the theatre.

The theatre show opens with a young man from Italy and a student of Arturo Brachetti, Filiberto Selvi with a short, very nicely routined Dancing Handkerchief that has an ending getting laughs and applause.

Richard Pinner hosted the pre-Christmas shows and Danny Buckler the later ones. Danny introduces himself and goes through an entertaining sequence involving up to six audience members to reveal a chosen card.

The immaculately dressed Scott Penrose takes us through Alan Shaxon's Nudist Deck where the cards are given away at the finish. Scott recently acquired (and restored) the third known Maskelyne's 'Psycho' and treats us to a performance as Psycho reveals secret thoughts and numbers. Scott finishes his set with Houdin's Orange Tree. The oohs and aahs from the audience show how much they enjoy and appreciate this look at magic's history.

I’ve seen many do a C&R rope routine that includes every known move resulting a blob of confusion. Danny's has three stages, each perfectly clear and direct. Then onto introducing BGT winner Richard Jones who closes the first half.

Richard's style is quiet, polite and totally engaging. His set is appx 25 minutes and mostly mindreading. A member of the audience chooses a name revealed via Percy Naldrett's Phantom Artist. Next six random audience members pick numbers which combined in various ways reveal a much larger number that Richard has predicted, not to mention all being the numbers on a lottery ticket. This whole sequence is well routined to flummox those who might be familiar with certain methods. Richard's last effect is a hugely entertaining Card Sword routine. One stock gag that fits very well here gets more laughs than anyone else I’ve seen use it. He closes with a surprise reference to the number prediction bringing prolonged applause. Richard didn't lose the opportunity to plug his upcoming tour starting in February.

During the interval the audience again have the opportunity to explore the building or enjoy the entertainment in the club and Devant rooms.

Foot juggler Antje Pode opens the second half with her podiatric skills. While most people will have seen jugglers, it's unlikely they'll have seen anything like this. Antje, with two feet in the air juggles, first one suitcase, eventually two while spinning a bag and juggling fruit with her hands. It's no surprise she received rapturous applause.

Danny Buckler gets more out of very little than anyone I know other than David Williamson. His set involves two adult helpers for a hilarious find a card routine followed by three children and a Cards Across sequence. The roars of laughter, Danny's rapport with the children and his ability to improvise show why he is so popular on Disney cruises. A masterclass in family entertainment.

Filiberto Selvi returns to close the show with an act in three phases mixing manipulation and music. An act that pleases the eye, the ear, the mind and the heart. I loved every second of it and I’m sure he we’ll be a featured act at many upcoming conventions.

Overall the show is amongst the best magic shows I’ve seen as it touches all bases and ticks all boxes. Basically a very well balanced show. Produced by Scott Penrose, Katherine Rhodes and Darren Martin.