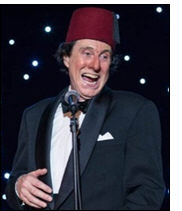 It seems far from a coincidence that ITV Showcase Drama screened this television epic only days after the 30th anniversary of the death of (15th April 1984) the comic great. In a two hour special actor David Threlfall (far removed from his role as Frank Gallagher in Shameless) starred as the legendary mapcap comedy magician. In Brian Nye’s tightly bound script it recalls the on and off stage lifestyle of Tommy Cooper, magician, comedian, and family man.

The production opens in Cairo in the 1960’s where Tommy buys a fez from a market stall and the stall holder says “Just like that” not knowing he is selling it to the man who invented the expression! I actually recall Tommy detailing this on one of his many TV interviews.

The story goes on to show Tommy’s rise to fame in theatres, night clubs and television. It has all the emotions of a successful performer, his love for two women and his apparently arduous relationship with agent Miff Ferrie, well played by Gregor Fisher. David Threlfall has some of the natural facial features of Tommy and with the expertise of make up and wardrobe, made him, in my opinion the perfect person to play the role. I feel the oft close up on the big feet adds to all this. The voice too was one of the best I have witnessed and there have been some good ones over the years like Christopher Brand, Jerome Flynn, Phil Hoyles and Clive Mansfield, all of whom have been associated with the plays.

There are two scenes depicting ‘Ken Brooke’ demonstrating the multiplying bottles and legs table in his studio. I remember going there myself in the 1960’s as a teenager and being amazed at him performing the Chop Cup - but I digress.

As time passes, Tommy’s health deteriorates and a heart attack in 1977 brought a shock to all. He soldiered on and eventually the fateful day in 1984 arrived where he died on stage on television during the transmission of a programme “Live from Her Majesty’s.”

This was a strong piece of television drama and to those responsible for production, both in front and behind the cameras, I offer congratulations for mixing comedy and tragedy in such a way to make it a compelling view.